runnerjp said:
I think trends are the "Norm" we expect to see and helps is whittle down the field but there will always be that 1 variable that will break the pattern

one variable may be the headgear influence

Been working through trends for each race of day 1 so far and intend to do all the days before we get to the racing. I've done 20 years/ 10 years and 5 years where applicable. The aim was to keep as many qualifiers and avoid odds/ odds position etc that may change on the day. The hope is that the 5 year trends are more likely to produce the key candidate and the longer trends gives the others to consider. Some may be almost identical, but I tried to go through the filters I like without consulting each set.

I also emailed Chris @ HRB to see if we can get antepost qualifiers in these bigger races. Don't know if it's possible and it probably wont come before Cheltenham, so it will be the night before the qualifiers show. 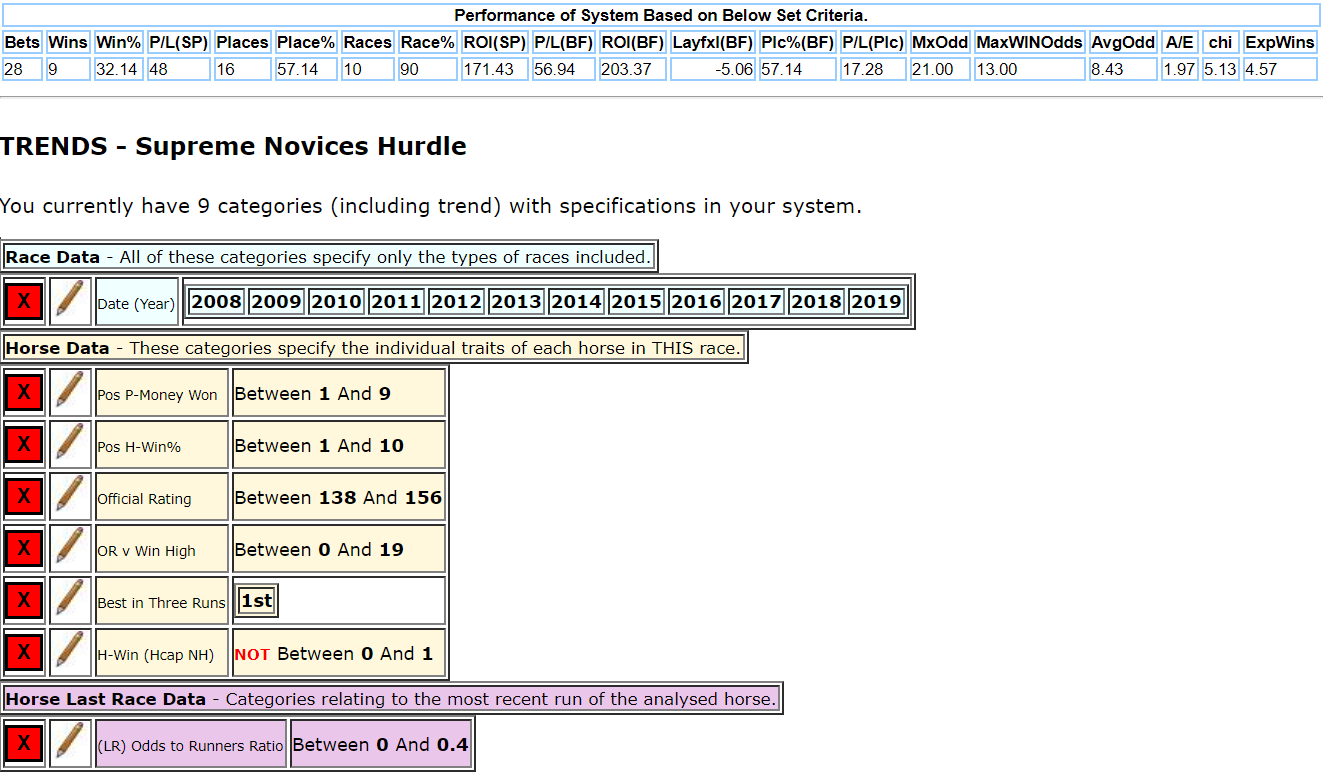 I may review these as I post them on one page to attempt to make them more consistent.

Hi bud for those without HRB some of the category’s are a little confusing any chance of a very easy explanation.

Pos p money won is the order in which the horses have won prize money, so 1 has won the most, 2 next etc. so being the 10th best prize winning horse or worse doesn't translate well with the previous results. 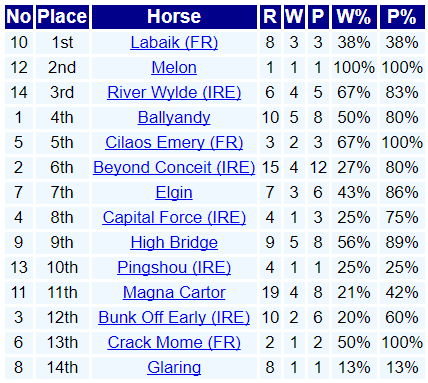 Think that is the more confusing ones, but let me know if I missed any.

Getabird is expected to be suited by the testing conditions in his attempt to gain a first top-level success in the Sky Bet Supreme Novices' Hurdle at the Cheltenham Festival on Tuesday.

The six-year-old will put his unbeaten record on the line as he looks to give trainer Willie Mullins, who is also represented by Sharjah, a sixth victory in the two-mile curtain-raiser.

"I think the rain is definitely in his favour as he handles the soft ground and he stays further than two miles," said assistant trainer Patrick Mullins.

"He has travelled over fine and has had a good preparation. Obviously he has got to improve from his current performances, but he is more than capable of doing it.

"It looks an open renewal but Kalashnikov sets a fair standard and Mengli Khan is a Grade One winner. He is a different type to a lot of our previous runners in the race."

Of Sharjah, he added: "I think he would prefer drier ground, and that would be the concern. It was just drier ground when he ran very well over Christmas."

Amy Murphy is looking forward to seeing Betfair Hurdle hero Kalashnikov on the biggest stage of them all, but recent rainfall at the track has slightly tempered optimism.

The Newmarket handler said: "He was impressive at Newbury. Under 11st 5lb, as a novice, it was an extremely good performance.

"He was a big baby going into the race. He'd never seen anything like that before but we were delighted with him.

"He seems in great order at home. We'd rather it wasn't raining the way it is, but there's nothing we can do about that and at least with it being the first race, we'll be running on fresh ground.

"We're excited to be there. For a yard the size of ours to have two horses with live chances going to Cheltenham is fantastic and we're very much looking forward to it."

Tom George feels Summerville Boy will have plenty in his favour as he looks to follow up his victory in the Tolworth Hurdle at Sandown.

George said: "His form is rock-solid. You can put a line through his first three runs as they all went at a canter and he needs to come off a strong gallop.

"The first time he got that was in the Tolworth, which he won fair and square. It didn't surprise me what happened.

"He needs settling in behind a good gallop and he will get that here. He coped with the ground well at Sandown, but I'm not saying he needs heavy ground as he will go on good ground as well."
Last edited: Mar 12, 2018

Probably have a look at C, SH & SB who hit the last 5 year trends.

The last 5 years, 4 have been won by the top 2 in the market. Labaik being the exception, who may have been nearer the top, if not for the uncertainty around getting a run.
R

Kalashnikov might get pulled from this if ground too heavy, Bro sent me this
I can only tell you what Amy has told me personally and that is he will be a better horse on better ground. I was at the yard last week and she said if it was heavy she would probably pull him and save him for Aintree. He has shown in the Betfair hurdle that he clearly handles cut in the ground, but heavy ground is not what he wants in an ideal world he wonts good to soft, his knee action shows that soft is no problem but heavy might just bottom him out.

Does any one else think GETABIRD's jumping o the right on a left handed track is a majour concern!

runnerjp said:
Does any one else think GETABIRD's jumping o the right on a left handed track is a majour concern!
Click to expand...

Has to be noted as a concern as he jumps to the right also which on a left handed track could be an issue.

If he jumps noticeably to the right here then he won't win. Simple as!

My other concern is ruby onboard - snow will have helpped as stopped alot of meets giving jcokeys time off but with a horse that needs help jumping streight - testing conditions - he may need a ride or 2 to settle into it?!?!